The stories have been around longer than anyone can remember. Passed from grandparents to grandchildren some explain the lore of the region. Others give new meaning to odd names used to describe the lakes and land. Together they make up the Legends of the Glacial Lakes & Prairies.

Before the white man came, the Sisseton Sioux and the Chippewas were rivals.  One night, a band of Sissetons ate and danced at their camp on a point of land.  The point almost reached an island in the lake.  A war party of Chippewas planned a surprise attack on the village after the powwow ended and all were asleep.  While they waited, they made rafts in the woods across the bay from the island.

The tom-toms were still beating loudly in the Sioux camp when the Chippewas drifted to the island on the rafts, waded across a sandbar to the point of land, then hid in the bushes.

An old Sisseton squaw out gathering wood for the fire came upon a brave in strange war paint.  She screamed and he hit her with his tomahawk.  The other wood gatherers ran to the camp crying, "Enemies, enemies!"

The Sisseton chief sent older men across the bay to wait in the woods on horses.  The young warriors were ordered to chase the Chippewas to the island.  Outnumbered, the Chippewas fled to the island where many were scalped.  The rest started to swim across the bay.  As they reached shore, they were trampled, drowned, or tomahawked by the older Sissetons.

The Sissetons had many enemy scalps.  They sang and danced all night, saying "Swimming enemy, swimming enemy."  To this day, the lake is called Enemy Swim Lake.

Sica Hollow once protected many peaceful Indian camps.  Its trees blocked the North Wind.  But then a stranger came.  The young girls grew afraid.  The old women wished to send him away.  The old men said, "When it is warm again outside the Hollow, he will go."

The sly stranger, Hand, did not leave when the Sun returned to the north.  Instead he taught the young boys to strike and kill.  Blood flowed.  The old men sought help from Wicasa Wakan, Medicine Man.  "What shall we sacrifice to make our Hollow as it was long ago?"  they asked.

Wicasa Wakan returned to his lodge and waited for Wakantanka, the Great Spirit, to reply.  Soon Wakantanka sent his messenger, Thunderer.  Thunderer's eye flashed.  His dark wings beat the air, and he brought a cloud that rained over the Hollow.  Madness seized Hand.  He tried to run, but vines encircled his ankles.  The water filled his screaming mouth.  Thunderer's talons ripped out his eyes so he would never see the Happy Hunting Ground.

Of all the people in the Hollow, only a raven-haired maiden called Fawn was saved from the rising water.  She fled to the top of the highest hill and sang her grief and remorse to the Great Spirit.  Then she slept many days.  When she awoke, the Hollow was clean and bright.  Yet the memory and the evil name - Sica Hollow, Bad Hollow - linger.

Beautiful Minnecotah, who lived on the banks of Lake Kampeska, captured the hearts of many young braves from her tribe.  But the heart of Minnecotah belonged to a brave hunter who lived in the Wahpeton country.

One day, when the tribal men told her to choose among them instead of waiting for the wandering hunter, Minnecotah said she would marry whoever could throw a stone farthest into the lake.  For three days, the men threw pebbles, rocks, and boulders into Lake Kampeska, battling for the hand of Minnecotah.  They threw so many stones that an island formed in the lake.  They made waves great enough to overturn the canoes in which old men chosen as judges has been riding.  The old men could not say which warrior cast a stone farthest.  The young men grew angry.

Seeing the throwers' anger, the old men seized Minnecotah, put her on the island of stone, and told her she would stay there until she made a choice or died of hunger.  Minnecotah stayed on the island, remaining faithful to her lover.  She fed on small portions of fish taken from the pouch of a mother pelican carrying food to her young.

One night, Minnecotah's lover paddled his canoe to the island and rescued her.  In the morning, the men of Minnecotah's tribe saw that she was gone.  The island of stones can still be seen in Lake Kampeska, near Watertown, South Dakota.

Long ago, a band of Sioux camped by a small lake.  Each Sioux maiden dreamed of the brave who would bring gifts.  Her father would accept the gifts and she would become the brave's wife.

We-wa-ke, the fairest maiden in the camp, dreamed only of Big Eagle.  Four times Big Eagle had come, and four times her father had rejected him.  Then one day, old White Tail Wolf came.  We-wa-ke begged her father to refuse his gifts, but her father accepted and the grizzled and toothless chieftain dragged her weeping to his lodge.

That night, while White Tail Wolf celebrated, Big Eagle and We-wa-ke rode away on a pony.  When the old chief found them gone, he summoned his best trackers.  Soon the braves returned with the two lovers bound between them.  Knowing that death was near, We-wa-ke and Big Eagle bravely declared their love for each other and vowed to meet in the Happy Hunting Grounds.  Their words enraged the old chief, and he plunged his knife into Big Eagle's breast.  We-wa-ke rushed to her dying lover's side and kissed him.  Angrier still, White Tail Wolf ordered his wife bound to a tree and beaten.  Then he shot an arrow into her heart.

The two lovers were buried side by side, and old White Tail Wolf called upon the Evil Spirit to take them to the Land of Everlasting Sorrow.  But the Great Spirit heard his awful words and struck White Tail Wolf dead with a bolt of lightning.

The tribe soon moved westward.  But they never forgot the sorrow and death left on the shore of Punished Woman's Lake.

Just over a hundred years ago, as pioneers worked to settle South Dakota, railroads rushed to provide transportation. Tracks were hastily laid over the prairies.

Each day, a small boy left his family's homestead near the village of Elrod to wait along the temporary siding. Whenever the work train whistled by, the youngster grinned and waved.

The engineer and brakeman always returned the greeting, and began to look forward to catching sight of their little friend.

Then one, two, three days passed when the boy failed to meet the train. The trainmen stopped at the homestead to ask about him and  learned that he had grown suddenly ill and died. The boys' parents took the men to a small grave near the railroad right-of-way.

Not long after, when the grief-stricken parents began preparing to move on to the next job, the trainmen offered to keep weeds off the trackside plot. Word was passed along from crew to crew, year to year. When the railroad started passenger service over the tracks, travelers watched from the windows of the train as the crew laid flowers on the small mound and "Big Bill" Chambers, the conductor, bowed his head in prayer.

"Big Bill" and his successors upheld the tradition until the passenger train was discontinued in 1950. Then the crew of a "way freight" train took over for a few years. In 1953, the Rotary Club of Clark,  South Dakota, held the first Memorial Day ceremony honoring "The Little Fellow." The annual ceremony salutes a special friendship to this day. 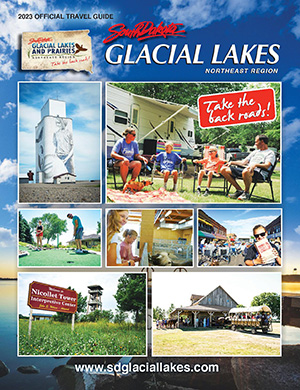