About 20 thousand years ago, the last in a series of glaciers moved across North America like a pancake spreading on a griddle.  As more and more snow fell at its center, the glacier squeezed outward in all directions and its edges crept farther and farther over the land.

Eventually the ice entered South Dakota from the northeast and split in two around a highland.  The larger slice moved southeastward, while the smaller segment went south and west through  what is now the James River Valley.   Gradually, the eastern slice climbed the dividing highland to join the western segment in a continuous frozen expanse that buried the land.

Geologist believe that, near Aberdeen, the glacier piled up 1600 feet of ice.   Since just one cubic foot of ice weighs about 57 pounds, a glacier 1600 feet thick would exert 45 tons of pressure on every square foot of ground it covers.   And when it moves-even just a few inches a day-it acts like a bulldozer, scouring and scraping the land, leveling high places and filling in low ones, smoothing some surfaces and gouging others.

The glacier came through northeastern South Dakota in fits and starts, moving and stopping and retreating, then moving again.  When it moved, it marked the ground with rocks and gravel frozen in its base.  Sharp-edged rocks cut long grooves in bedrock, and fine silt and clay polished surfaces smooth in places like Beadle, Grant, and Marshall counties.  When it stalled or  retreated, the glacier dropped piles of sediments called moraines.  All the hills, ridges, and hummocks of the Glacial Lakes region are these moraines, smaller where the glaciers simply stalled, larger where it actually retreated.

The whole Coteau des Prairies or "hills of the prairie," in fact, is glacial moraine formation.  This enormous wedge-shaped plateau, with its point just over the North Dakota line and its base in northwestern Iowa, grew from the ancient highland that divided the glacier.  When the eastern slice of the glacier rode up the highland, it carried a great burden of eroded rock debris frozen it its icy bottom.  The more the glacier advanced, the more ice and frozen sediment it piled onto the highland.  For as long as the glacier crept forward, the highland, with its growing pile, was like a wall being built layer upon layer.  When the glacier retreated entirely-when its ice finally melted-all its sediments were left behind in long, gravelly ridges.

The lakes-the clear blue waters that give the region its name-were also formed when the glacier retreated, from huge chunks of ice left behind as the glacier melted away.   When the ice chunks themselves melted and the land around them slumped in, they left large round holes that later filled with water.  Some of the lakes formed this way, called closed basins, are like miniature versions of Utah's Great Salt Lake.   Rain or snow falls, moves through the soil gathering minerals, drains into such a lake, and stops.  There's nowhere for the water to go but up, and as it evaporates, it leaves its salts behind.  Medicine Lake, for example, has 1 1/2 times as much salt as sea water.

Big Stone Lake and Lake Traverse, the area's two largest lakes, were also formed when the glacier retreated, but not from chunks of ice.  As the glacier melted, it sent torrents of water southward.  This water dammed up behind a barrier of glacial debris and pooled into a lake larger than all the Great Lakes combined.  Eventually, the lake rose high enough to carve a channel through the barrier and create what has been called Glacial River Warren.  As the glacier meltwater found other outlets, the current in River Warren began to slow and the formation of Big Stone and Traverse began.

Since the passage of the glaciers, nothing else has so profoundly affected northeastern South Dakota....except man. 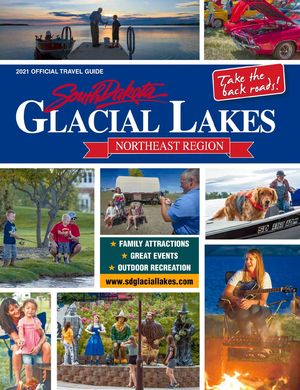